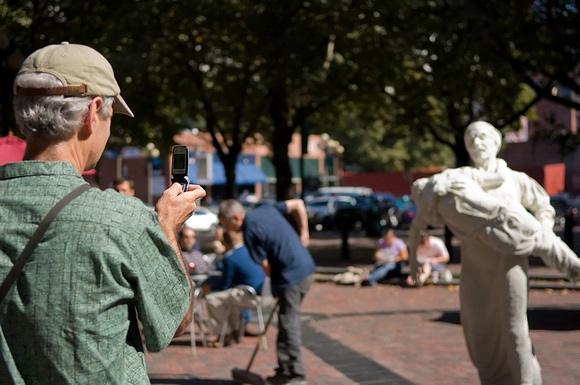 With heightened airport security due to potential terrorist threats, continued and increasing war in the Middle East, and the fifth anniversary of Sept 11th upon us, Seattle artist Michael Magrath has created a series of site-specific sculptures intended to ask stark questions about the real origins of terror.

Lot’s Tribe is conceived as a temporary memorial to the other victims of 9/11: Each life-sized figure, cast in ordinary table salt, will be placed in Occidental Park, in Pioneer Square, Downtown Seattle in the early morning hours of September 11, 2006. There the white, crystalline figures will stand, sudden incursions of unwelcome reality into our daily lives, until the rains come and slowly they dissolve away.

"These figures were culled from news images coming out of the Middle East over the past few years," says Magrath. "The scenes were shocking, and I wondered why they were not more widely seen. They made me think about what it feels like to witness something so unexpected and vast; an explosion that will permanently alter your life, and how that feeling chages over time. My intent was to render some sense of these scenes in as real and arresting manner as possible, a kind of 3D photojournalism -- silent monuments to seemingly distant events with which we, whether we recognize it or not, are intimately connected."

These figures are made almost entirely of salt, which means they will erode over time. They are also fragile. Please refrain from touching delicate parts! If you would like to see photos of the work, follow the progess of the erosion over the next few months, or for latest news, please visit the site blog -- http://lotstribe.typepad.com/lots_tribe.

In addition to the many hundreds of hours of volunteer labor put in by a fantastic crew of nearly two dozen students, sculptors, and friends who came regularly for the 6 weeks it took to mold and cast these figures, support for this project was generously provided by 4Culture, by the Gage Academy of Art, and the University of Washington Sculpture and Public Art Department. Content however, is the sole responsibility of the artist. He may be contacted at [email protected].
NIKON CORPORATION NIKON D2Xs, f/2.8 @ 45 mm, 1/1250, ISO 100, No Flash
© Jay Philip Williams
Powered by ZENFOLIO User Agreement
Cancel
Continue