Visitors 377
Modified 4-Apr-08
Created 3-Apr-08
172 photos
The history of Latin America is bloody, filled with pain, suffering, and murdering, and just plain foreign to a Generation Xer, such as yours truly. I did, however, get some firsthand exposure to the feelings that the people down here have toward some of the events in their history.

In Argentina on March 24th of 1976, the military forces deposed President Isabel Perón and took the reins. Over the coming years, these military leaders murdered tens of thousands of people who didn’t see eye-to-eye with them. The goal of these Generals was apparently to improve the economy of Argentina and they were obviously very serious about it.

Lacking widespread support, these leaders started a war with England in 1982 by trying to annex the Falkland Islands. They sent thousands of young troops to the slaughter.

Growing opposition led to their resignation in 1983.

To this day, the government will not release information regarding the disappearance of the thousands of its citizens who were murdered during the junta’s rule. When someone who knows something about it starts to volunteer information, they magically die. That’s motivation not to talk.

On March 24th of 2008, on my way home from my Spanish lesson at Patricio’s apartment, when I came out of the subway entrance, there were hundreds of people in the street with large banners. There were some guys beating on drums, and there were cops hanging out, keeping an eye on things. Over the next several hours, the crowds, noise, and intensity grew. Thousands and thousands ended up in the street—Avenida de Mayo—with loads of banners, drumming, and chanting, and there were speeches at Plaza de Mayo. This went on until after dark.

The people were trying to send a message to the government—a protest of sorts. They were saying to the government, “Where are our children who disappeared during the junta’s rule?” They ask the same question of the government every year and they still have not gotten answers, even after twenty-five years.

This was my introduction to the history of Argentina. 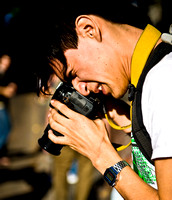