Visitors 38
Modified 7-Mar-08
Created 7-Mar-08
23 photos
Selarón is a Chilean-born artist, but lives in Rio de Janeiro in an apartment in the middle of the stairway connecting the neighborhoods of Santa Teresa and Lapa. It's a stairway that he has decorated with thousands of tiles of his own creation and which have also been donated by people around the world.

The pregnant woman you see in so many of the tiles and who is his favorite subject is a Columbian woman he met several decades ago.

The morning I went to visit the stairs, he was sweeping up some leaves which had fallen during the previous day. He can be found at the stairs each morning working on his art. He doesn't just work on the tiles—in fact he doesn't work on them too much now, apparently—but he paints Rio. You can buy art of the woman, of favelas, and of other subjects. It's right there for sale.

If you're in Rio, pay him a visit. He's friendly and would love to sell you some artwork and have a chat about the world. 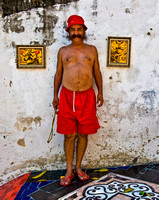 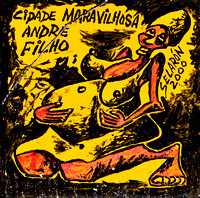